Hallam London delivered a sensational concert at the Tonne. 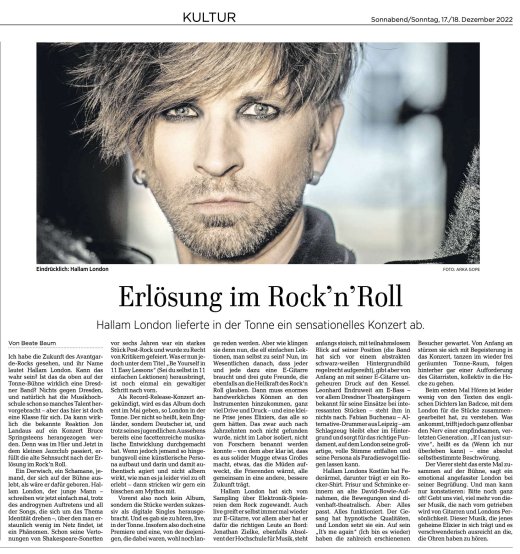 I have seen the future of avant-garde rock, and its name is Hallam London. Can that be true? Is this really a Dresden band up there on the Tonne stage? Nothing against Dresden, and of course the music academy has produced many talents – but this one is in a class of his own. Jon Landau’s well-known reaction to a Bruce Springsteen concert can really be used here. Because what happens in the here and now in the small jazz club fulfils the old longing for redemption in rock’n’roll.

A dervish, a shaman, someone who lives it up on stage as if he were born for it. Hallam London, the young man – let’s just write that now, despite the androgynous appearance and all the songs revolving around the theme of identity – about whom one finds surprisingly little on the internet, is a phenomenon. His settings of Shakespeare sonnets six years ago were already a strong piece of post-rock and rightly celebrated by critics. However, what he is now releasing under the title “Be Yourself in 11 Easy Lessons” is a huge step forward.

Announced as a record release concert, the album will not be available until May, according to London at the Tonne. In spite of his stage name, Hallam is not English but German, and despite his youthful appearance has already undergone a multi-faceted musical development. But when someone so devotedly builds up an artistic persona and acts authentically within it and doesn’t come across as silly – as we unfortunately experience far too often – then we like to join in with building the myth.

So for the time being there is no album, but the pieces will be released successively as digital singles. And they could be heard, live, at the Tonne. So it was a premiere after all, and one that the audience will probably be talking about for a long time. But what do they sound like, the eleven simple lessons of being oneself? Well, basically, that everyone needs an electric guitar and three good friends who also believe in the healing power of rock’n’roll. Then there must be enormous craftsmanship on the instruments, a lot of drive and pressure – and a little pinch of magic elixir that everyone would like so much. That elixir has not been found even after decades, has not been isolated in the lab, has not been named by researchers – but it is clear that it makes something great out of solid music, something that wakes up the tired, warms the cold, carries everyone together into a different, better future.

Hallam London has turned from sampling to electronic experiments to rock. He picks up the electric guitar himself at times, but he also has the right people by his side for this: Jonathan Zielke, also a graduate of the Hochschule für Musik, initially stands stoically at his position with an impassive look (the band has literally lined up in front of an abstract black and white background picture), but then erupts into a wildly expressive performance with his electric guitar. Leonhard Endruweit on electric bass – known especially to theatre-goers for his involvement in Dresden plays – is in no way inferior to him. Fabian Buchenau – alternative drummer from Leipzig – stays more in the background and provides the right foundation on which London unfolds his great, full voice and lets his persona fly as a bird of paradise.

Hallam London’s costume has feather sleeves, underneath he wears a rocker shirt. Hairstyle and make-up are reminiscent of old David Bowie recordings, the movements are diva-like and theatrical. Everything fits. Everything works. The singing has hypnotic qualities, and London uses them. The large audience has been waiting for his “It’s me again”. Right from the start, they throw themselves into the concert with enthusiasm, dance in the Tonne room, which has been cleared, and afterwards even follow a request by the guitarist to collectively squat down.

At first hearing, unfortunately, little of the lyrics by the English poet Ian Badcoe, with whom London collaborated for the pieces, can be understood. What comes across, however, clearly strikes a chord with a sensitive, wounded generation. “If I can just survive”, it says – an absolutely self-determined evocation.

This is the first time the four of them have been on stage together, says an emotionally touched London in his greeting. And one can only conclude: Please, many more times! Give us much, much more of this music that is driven by guitars and London’s personality. This music that carries that secret elixir and lavishly hands it out to those who have ears to hear.